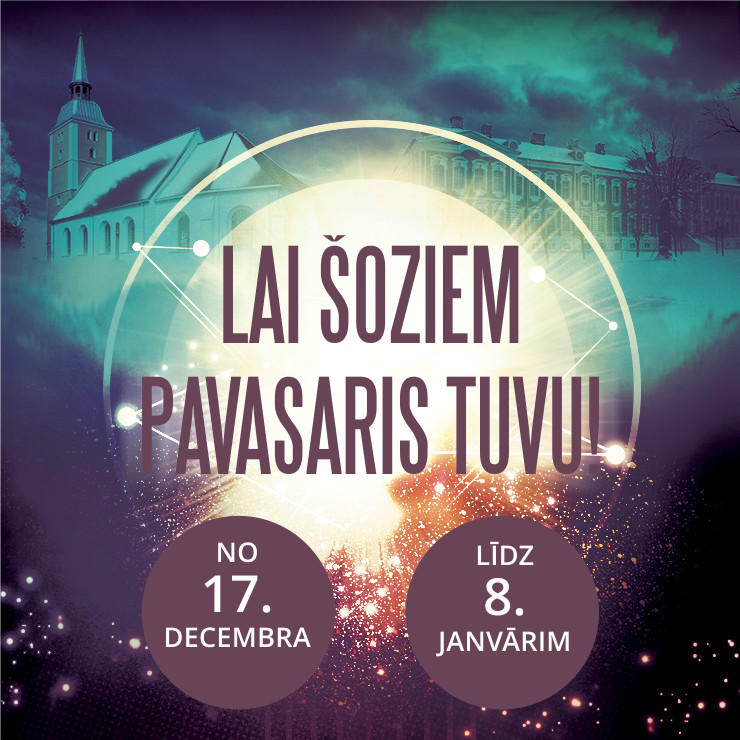 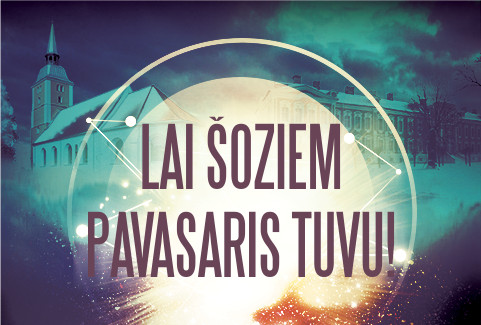 “LET THE SPRING BE NEAR THIS WINTER!” - a journey of the light and sound

ONE TICKET FOR TWO EVENTS! ENJOY THE LIGHT PERFORMANCES IN THE RENOVATED CULTURAL SPACE "MEŽOTNE CHURCH" AND IN RUNDĀLE PALACE!

Rundāle Palace and the renovated cultural space "Mežotne church", the director Kārlis Anitens and the lighting artist Oskars Pauliņš offer a unique winter night journey in Zemgale — "Let the Spring Be Near This Winter!", which includes visiting two events in one evening: a light and sound show in the renovated cultural space "Mežotne church" and the interplay of chandeliers, shadows and meditative music in the luxurious halls of Rundāle Palace. Venues are four kilometres apart.

"Let the Spring Be Near This Winter!" is a light and sound performance in two acts at two venues in one evening. There are no actors and no text in this performance, but there is something else very important — the main character in this performance is the visitor himself. With the interplay of the light, sound, music, and surroundings, the story is presented to the visitor all around, placing him/her in the centre of this story and allowing to experience the coming of the spring not only in nature but also in his/her consciousness.

It is from this point of view that the author of the idea and the director Karlis Anitens created the performance: “What is my wish this winter? I wish spring was near this winter! It's not that I don't like the frost and the snow. I love the winter, but I wish in this winter, so difficult for humanity, to have an emotional feeling that spring is near. I wish to believe that the spring of humanity is just over the hill — to stop the war’s numbing horrors; to release the mad shackles of the crisis; to light the way to move forward. It is essential to strengthen this belief in the emotional spring of humanity. The source of inspiration and the central axis of our performance is the poem of Latvian poetess Anna Brodele "Spruce flower", in which the spruce is the first to feel that spring is near, and that is why it lights up brightly at Christmas. We need to light those lights of a Christmas tree in ourselves as well, to draw a straight line through the spring in nature to the spring of humanity. In geometry, there is an axiom that only one straight line can be drawn through two points, so the performance takes place in two different places at the same time. This is our axiom about the straight line of the spring.”

The act in the cultural space “Mežotne church”, which opened in September and is waiting for its spring, is a performance of light, sound, and acoustic echoes about the parallel between the spruce flower of Anna Brodele and the voice of the human heart. Whereas the act in Rundāle Palace is designed as a walk through the halls of the palace, watching the luxurious chandeliers, which only a few have seen in action. The light of the chandeliers, the games of the shadows, created for the performance, on the decorations of the hall, reminiscent of spring, meditative music in which the classic Christmas melodies intertwine with meditative compositions, and spring sounds, will make you feel that spring is just right around the corner. It is up to the visitor to make an intuitive or practical choice, which of the acts of the spring line to visit first, because the performance can be enjoyed in both directions and the ticket only determines a specific starting time for the performance in the cultural space "Mežotne church".

Kārlis Anitens and Oskars Pauliņš have collaborated several times in creation of light and sound performances, mostly in projects outside the capital. In the summer of 2020, they created one of Latvia's most ambitious light and sound performances "The Tale of the Knight of Light" in Smiltene, in the spring of 2022 they created a performance dedicated to the actor Valentins Skulme in Malpils, they also have worked together to create several concerts and shows. Each individually has created countless events, performances, and shows. Kārlis Anitens is one of the best-known event directors in Latvia, while Oskars Pauliņš is the most sought-after lighting artist in Latvian theatres.

Tickets are not required for preschool children.

A ticket for visiting the performance in the cultural space "Mežotne church" and Rundāle Palace can be purchased at the box offices of Biļešu paradīze and online at bilesuparadize.lv.

The ticket indicates the start time of the performance at the cultural space "Mežotne church”. The purchased ticket is valid to visit the performance at Rundāle Palace on the given day between 16:30 and 20:30, except for December 22, 24, 31, and January 1. The ticket price also includes a visit to the exposition of the tower of the cultural space "Mežotne church”.

A cafe will be open in Rundāle Palace during the performance, except December 25