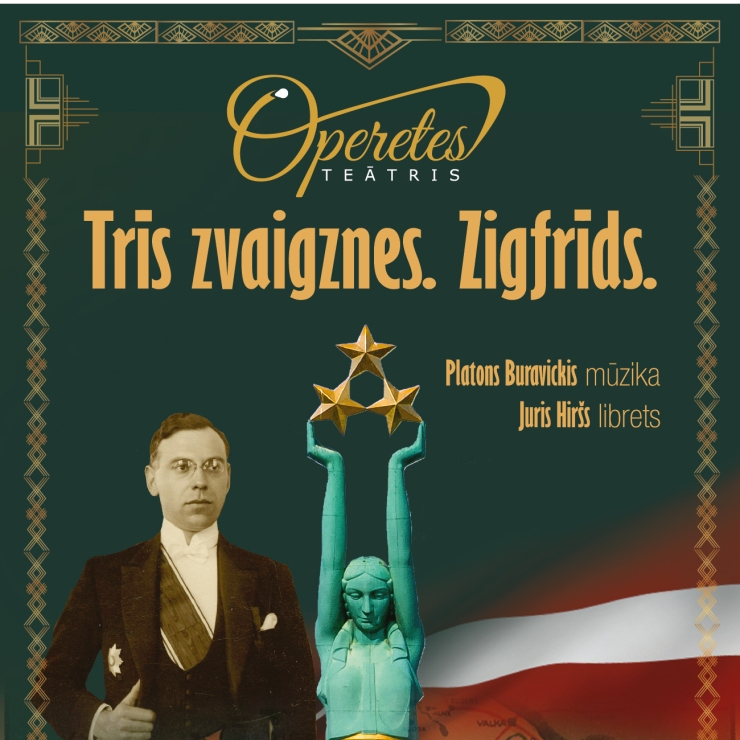 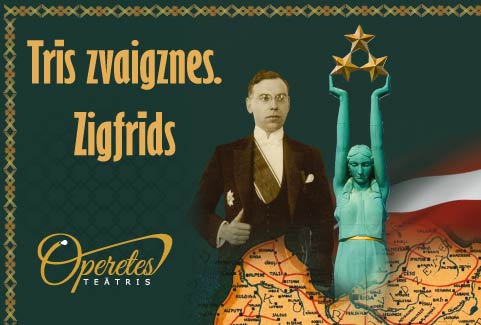 The production has been nominated in the "Surprise" category of the LSM Annual Culture Award "Kilograms kultūras 2021".

The operetta Three Stars. Zigfrīds has been screened as a biographical film about Latvia's first Foreign Minister, diplomat Zigfrīds Anna Meierovics (1887-1925). He was one of the most brilliant politicians, beloved by the people, who achieved the creation of the Latvian state de facto in 1918 and de jure in 1921.
The operetta is based on true historical events from 1917, when Zigfrīds Anna Meierovics was a member of the Refugee Committee in Moscow, to the tragic accident that prematurely took the life of the outstanding personality and internationally respected Latvian diplomat.

Platon Buravitsky's inspiring music for soloists, dancers and symphony orchestra in this work surprises with an absolutely fresh lyricism, unprecedented in his oeuvre, a wonderfully light, classically romantic musical fabric, in which operetta, musical, rap, contemporary dance rhythms are genre-blending;

The sumptuous visuals and visual-artistic themes of the production feature artworks by Ansis Cirulis and Vilhelms Purvītis.

"The story's leitmotif - Meierovic's "Dream Room" - is the forge of his ideas, where his portrait as a diplomat is formed from his dream of a free Latvian state - his thoughts and the narrative of his life as a diplomat. The text and poetry of Juris Hiršs depict Meierovic's life, his willingness to sacrifice the personal for the sake of Latvia's future, living away from his family for long periods of time. Hiršs has managed to combine the portrait of a statesman with the portrait of a man's life imbued with love. For the Latvian and international public, Zigrids's story will be both emotionally powerful in the language of music and a source of historical truths about the Latvian state that will nurture national patriotism. We are paying a debt to this great man, whose name was silenced during the Soviet era, whose children Ruta and Helmuts experienced the inhumanities of exile in Siberia, while Gunārs and Anna had to bear the brunt of exile too. Latvia, built by Zigfrīds, suffered many hardships, and only the patriotism of the people has been able to keep our three sacred stars shining, and the prayer "God bless Latvia" still rings out today with a free breath!" Dace Micāne-Zālīte, director.

"Meierovics is like a symbol, a flag, an anthem. Perhaps a monument to the possibility of the unbelievable? His ideas about the union of the Baltic States, about the Latvian state and its role on this planet.  We are citizens of the Latvian state, and with this production we are telling the story of the creators of our state,” Juris Hiršs, author of the libretto and lyrics

Dr. hist. Jānis Šiliņš:” Meierovics, who was one of the founders of the Latvian state and one of the brightest symbols of independence in his time, undoubtedly deserves special attention. Victories in diplomatic battles during the founding of the state were no less important than victories on the battlefield. It is no coincidence that Z.A. Meierovics was greeted as a hero upon his return to free Latvia. He was also an unconventional personality, a man of great working ability, excellent self-control, unquestionable patriotism and a "natural" talent for diplomacy. Latvia must honour its heroes!"

"The concept of the direction is based on a musical staging of a biographical story. It is designed as an interdisciplinary synthesis of contemporary artistic languages in music, film, choreography and visual arts. The first original Latvian production of the operetta genre of this century has been created in Latvia, in a screen version, combining the events of a hundred years ago in Latvia and in the world with a modern interpretation." Dace Micāne-Zālīte, director.

Commissioned by the Latvian Operetta Foundation as a tribute to Latvia.