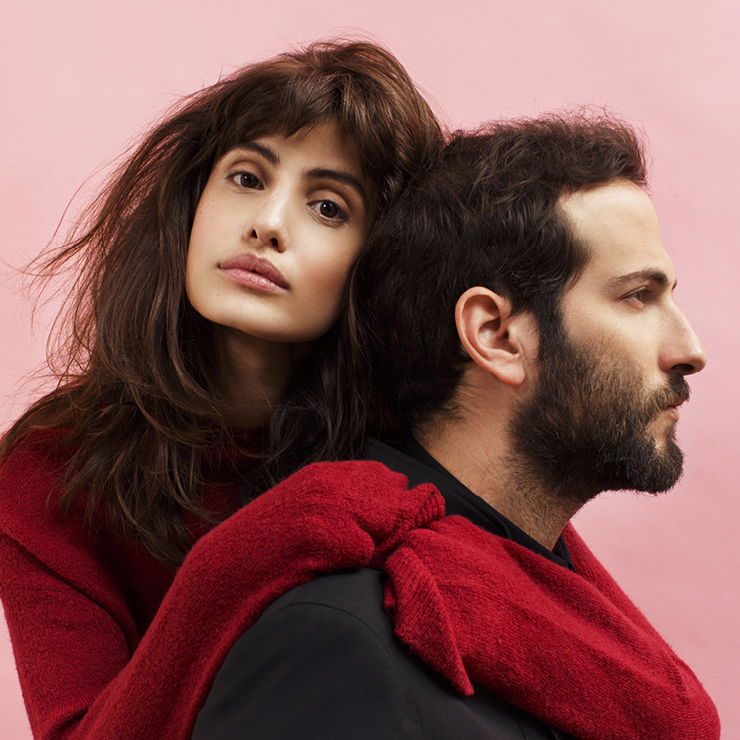 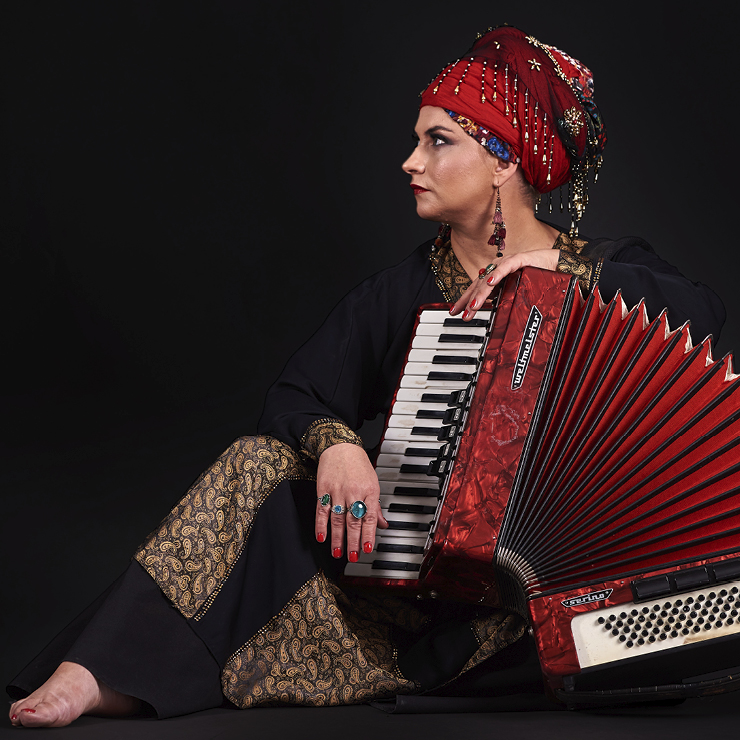 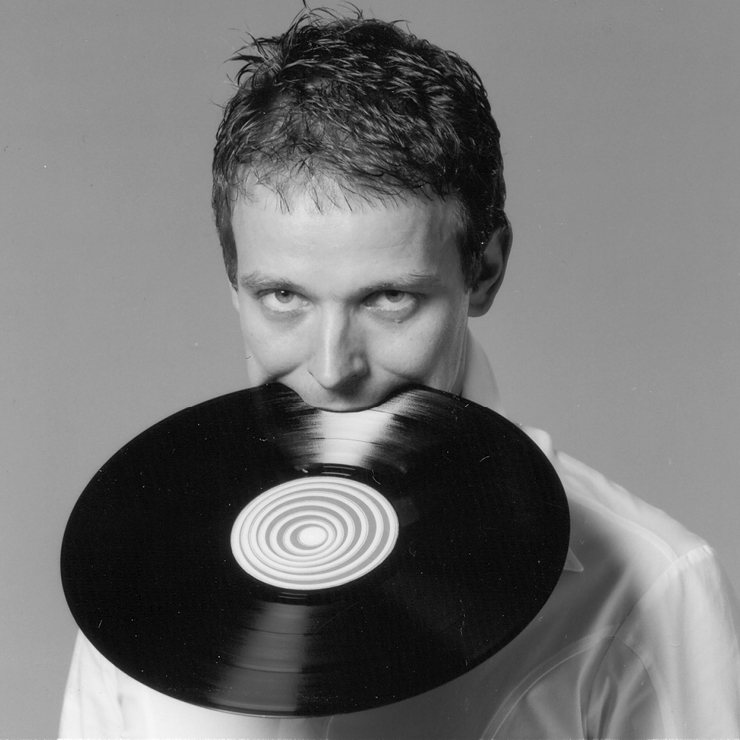 The band was formed as a duo in 2013 by Gil Landau (Guitars, Keyboards) and Yael Shoshana Cohen (Vocals), and was quickly signed by the indie label Anova Music. The group released their first EP, You're Mine, under Universal Records-Barclay in January 2016.

Gil Landau and Yael Shoshana Cohen met in Tel Aviv through mutual friends. The idea of the group was first conceived on February 2011 at Gil's birthday party, when they both found themselves outside of the in-crowd party, chanting out melodies while playing on Gil's father's old guitar.

For 18 months they wrote, recorded and performed what would be some of the songs in their future releases. At that point they sought to expand their sound by bringing on additional musicians.

Lola Marsh's music combines deep, warm, nostalgic vocals, heart-on-the-sleeve-lyrics and enchanting guitar melodies. Jason Grishkoff from Indie Shuffle described the band: "Lola Marsh does a superb job of slowly building up... bit by bit into something mesmerizing that has me waiting on bated breath for their debut album."

The duo gained notoriety on the heels of their 2014 performance at Primavera Sound Festival.

The band premiered their first single, "Sirens", via Nylon Magazine in March 2015; Nylon said of the song: "The Dreamy Tel Aviv Band's latest song, "Sirens", offers a twist on the typical sweet-yet-gritty indie sound...The track seems ready made for Quentin Tarantino's next film score.” It quickly received millions of streams and reached number 5 on Spotify's list of the Top 10 Most Viral Tracks in the US. The song was later featured in the American TV show Scream.

Following massive performances in leading festivals and after attracting media praise, they signed with Universal Music France and Sony ATV.

Christian Zehnder first studied jazz guitar before completing a course of studies in classical baritone singing (with Raphael Laback amongst others). Further training in overtone singing with Tokne Nonaka [J] and bodily vocal techniques in the style of Alfred Wolfsohn with Daniel Prieto (P) led him to a free, non-verbal style of singing and his very own unique musical cosmos, which often touches on the intersection between performance and musical theatre. In 1996, he and wind instrumentalist Balthasar Streiff formed the award-winning and internationally renowned duo Stimmhorn, with which numerous CDs, films and musical theatre performances were realised. Concert tours through the entire world, collaborations with Huun-Hur-Tu, the African overtone choir Xosa-Noquolnquo, Mercan Dede and many others. Various commissioned works for films, TV, World EXPO and radio. In 2012, Christian Zehnder was the recipient of the cultural award of the canton of Basel-Land, Switzerland, in the category of performance and theatre. In 2013, he received a carte blanche for creating a musical evening around his „new space mountain“ with the Berlin Philharmonic.

Christian Zehnder's multifaceted work includes the fields of jazz, new alpine and contemporary music. He has also worked as a director and composer for theatre (Theater Basel, Salzburger Festspiele, Mannheim, Luzern, Gorki Theater Berlin, and others). In 2012, his creation „oops, wrong planet!“ was performed at Theater Basel. 2014 saw the creation of a first opera, commissioned by Theater Basel: „Föhn“ was created as a collaboration with composer Fortunat Frölich and author Urs Widmer.

Through the ongoing evolution of European overtone singing techniques, Zehnder is widely recognised as one of the most creative and innovative contributors to the scene. In addition to his artistic activities, he has become heavily involved with the development of a pedagogic basis for overtone singing, be it as a lecturer in academia or through his teaching position with choirs and ensembles (including the Oslo Conservatory [N], Musikhochschule Stuttgart [D], Musikhochschule Basel [CH], and others).

His primary interest lies in the creation of pedagogically well-founded teaching materials for overtone singing. In collaboration with the famous Latvian Radio Choir from Riga, such an educational concept is already successfully being developed, allowing the professionally organised choir to successfully perform extraordinary compositions by their contemporaries.

DIKANDA is a music band of international renown, playing "world music". They come from Szczecin, Poland. In their artistic work DIKANDA promotes the authenticity of style – searching for new trends therefore most of their works are original compositions. They draw their musical inspiration from traditional folk sounds of the broadly defined Orient – from the Balkans, through Israel, Kurdistan, Belarus to India. Their works are dominated by the Balkan and Gypsy influences. The band has been playing since 1997 and has recorded 7 albums so far, including a Live DVD recorded in the Witkacy Theatre in Zakopane. They have performed hundreds of concerts, mostly in Germany, Austria and Switzerland but also in Russia, India and the USA. They have won numerous awards – among others in 2005 their album "Ushtijo" was awarded "The Disc of the Year" by a German magazine "Folker". DIKANDA's concerts are extremely emotional journeys through ethnic sounds, zestful meetings full of charisma, energy and true feelings. What sets DIKANDA apart is creating new words in their lyrics, thus forming their genuine language - "dikandish". The most important element of their artistic work is the message – a special relation between the musicians and the audience.