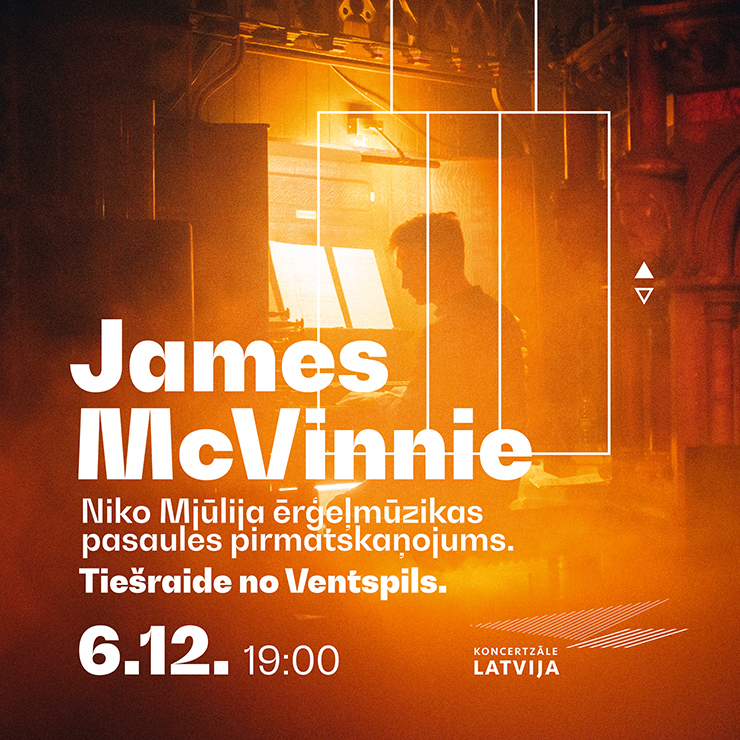 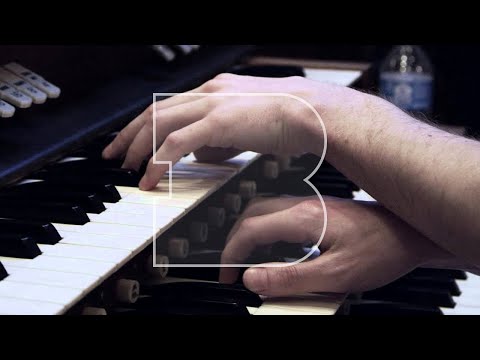 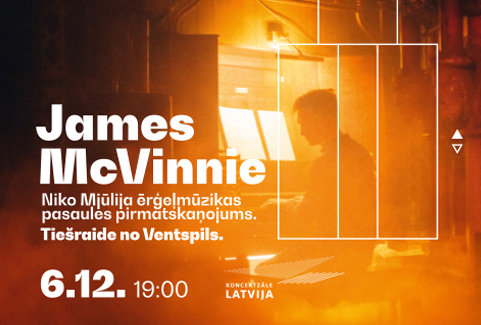 On Sunday, December 6, at 7:00PM a very special event is expected to take place at the concert hall 'Latvija' in Ventspils – the stunning British organist James McVinnie will perform a concert without spectators in presence, premiering the compositions from the 'Nativity Cycle' by the composer Nico Muhly created especially for this concert.

The concert, which was originally intended to be 'conventional', although for a limited audience, will be available for live stream from Ventspils across the Globe.

The common prehistory with Nico Muhly and James McVinnie for Ventspils goes back more than ten years. At that time, in the spring of 2010, Nico Muhly visited Latvia for the first and so far the only time together with his colleagues Ben Frost, Valgeir Sigurðsson and Sam Amidon at the theatre house 'Jūras vārti'. At the time, he revealed himself to many local listeners as a composer and brilliant pianist. Later, in 2016, James McVinnie, while performing in Ventspils, introduced the audience for the first time to organ music created for him by Nico Muhly, which was included in the album 'Cycles' released in 2013. A few months ago, at the end of August, N. Muhly’s opuses for the organ were interpreted by Aigars Reinis with Guntars Freibergs (marimba) and Pēteris Trasuns (viola) within the framework of LNSO festival 'Summer House'. Now the dice are falling so that on December 6 James McVinnie returns to Ventspils, as well as Nico Muhly’s organ music, the concert will be broadcast live from the concert hall without spectators, but compositions from 'Nativity Cycle', created by Nico especially for this concert and James, will experience the world premiere!

"'Nativity Cycle' is a set of organ pieces based on plainsong meant for use between Advent, Christmas, and Candlemas. Each pieces includes the original plainchant at the end, whereas the main body of the pieces includes the chant in various guises: sometimes explicitly stated, and other times hidden inside a larger, more busy texture, and other times completely abstracted. For instance, Reges Tharsis takes as its starting point a series of repeated notes in the original chant, and transforms this musical conceit into a technical one, wherein a single note is refracted between two hands playing two keyboards. Ecce Nomen Domini is a fantasia on a surprising and dramatic apostrophe in the original chant: “Eia!” — whose descending third becomes a motif across the entire piece,” says Nico Muhly of his current interest in creating organ music.

James McVinnie is an internationally known and recognized organist both as a solo artist and a regular collaborator in various notable new music projects. His musical and human openness has allowed his creative paths to intersect with a number of contemporary composers, producers and performers. Not only Nico Muhly, but also Tom Jenkinson aka 'Squarepusher', member of band 'Arcade Fire' Richard Reed Parry, David Lang, Bryce Dessner of 'The National' fame and others have created compositions especially for McVinnie. Sufjan Stevens as well whose composition “The Year of the Lord” J. McVinnie has included in Ventspils concert program.

From 2008 to 2011 and after studying music at the University of Cambridge, James McVinney was an assistant organist at Westminster Abbey, playing music both in daily moments and when leading the Abbey choir. The musician experienced his first solo concert at the age of 26, performing at the Salzburg Festival with the Freiburg Baroque Orchestra conducted by Ivor Bolton. Since then, participation in countless choir and vocal music recording sessions and European festival programs has been (until the recent events in the world) James' everyday life. Since his previous visit to Ventspils, James McVinnie has participated in Philip Glass’s Symphony No. 12 'Lodger' premieres with Los Angeles Philharmonic and London Contemporary Orchestra, performed Nico Muhly’s organ concert with the Philadelphia Symphony Orchestra, as well as collaborated with the electronic music duo 'Darkstar'.

“I keep thinking about what are the brightest opuses for the organ. I'm trying to encourage the creation of new music. It is necessary to create new pieces that could stand alongside the most significant canonized compositions,” once James McVinnie said in an interview to Jegors Jerehomovics, admitting that he still considers Johann Sebastian Bach the greatest composer of all time. Alongside Nico Muhly’s 'Nativity Cycle' premiere and the mentioned Sufjan Stevens’s composition, opuses for the organ by Johann Sebastian Bach, Marcel Dupré and Ferenc Liszt will be heard in Ventspils.

Ticket to the live broadcast of the concert/ access code available for EUR 8.00. As the concert approaches, the price will increase.