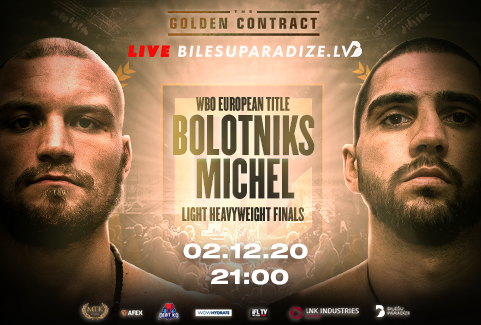 Ricards Bolotniks is excited about the prospect of facing Serge Michel in the Golden Contract light heavyweight final – and feels he has already identified the German’s best weapon.
Michel (11-1) stopped Liam Conroy in the fourth round of their bout last Wednesday to move into the final, while Bolotniks (17-5-1) beat Hosea Burton ( 25-1) by unanimous decision four days earlier in Riga, Latvia.
It means the two men will square off with each other in a highly-anticipated final, and Bolotniks has a message for the ‘Bavarian Sniper’ ahead of their showdown.
Bolotniks said: “I think this will be a great final between me and Michel. His semi-final with Conroy was a good battle. Conroy was having good chances and moments, but Michel caught him with the good right hand.
“Me and my coach saw that right hand and we know about it now! I’m happy to face Michel, and before the semi-final draw we said to each other ‘see you in the final.’ Now it’s happened and I can’t wait.”