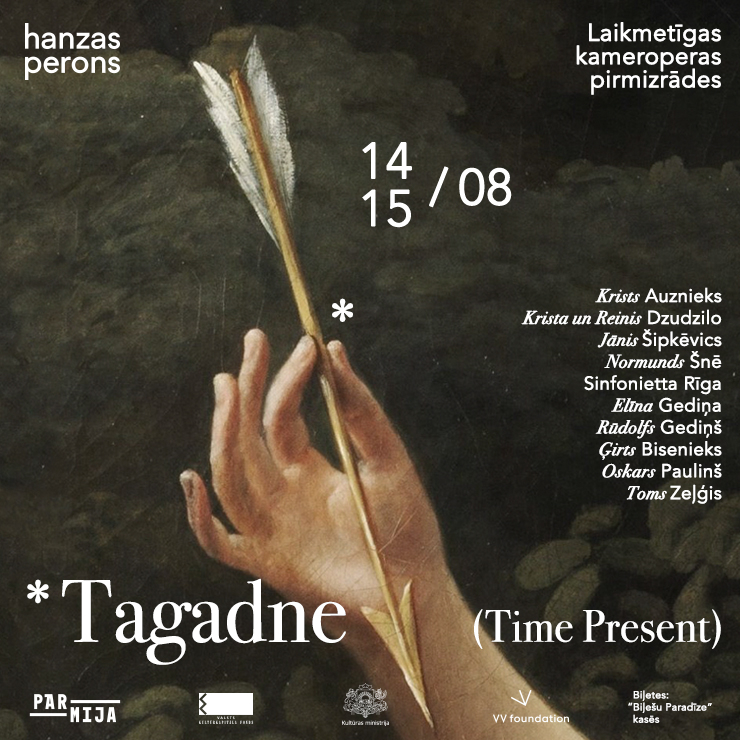 On August 14 and 15, “Hanzas Perons” is premiering two exclusive shows of contemporary chamber opera “Time Present”, created by visual artists Krista and Reinis Dzudzilo in partnership with composer Krists Auzinieks. The opera stands as a testament to the importance of high quality synthesis of visual arts and music.

The production of “Time Present” reveals itself in four scenes, journeying from silence to the birth of the opera. Time Present centres around the thought of time and its concurrence, about time’s expansion in both directions, reaching equal depths of the past and future. About the unity of everything and man as the eternal traveller, seeking enlightenment whilst accepting that waiting is a significant part of the journey.”

The contemporary chamber opera is inspired by the Latvian Grand Music Award (GMA) winning composition of Krists Auzinieks “Fire and Rose”, which is also incorporated into the new production. Yet “Time Present” culminates with a brand new composition by Auzinieks - “Is One” (“Ir Viens”) and will be premiered by “Sinfonietta Rīga” chamber orchestra lead by renowned conductor Normunds Šnē, together with soloist, countertenor and member of the prominent “Instrumenti” band Jānis Šipkēvics. The co-production is created in partnership with choreographer Elīna Gediņa and performers Rūdolfs Gediņš and Ģirts Bisenieks, as well as stage lighting experts Oskars Pauliņš and videographer Toms Zeļģis.

Krists Auznieks is one of the most influential and world-renowned young Latvian composers, having already received multiple international awards and composition commissions. His quintet “Piano” was featured in “The New York Times” as the best classical music moment of the week. His compositions have been performed from some of the biggest global stages - at the Kennedy Centre in Washington, the Walt Disney Concert Hall in Los Angeles,
the Royal Danish Theatre in Copenhagen, Amsterdam’s “Muziekgebouw”, New York’s Lincoln Center and more.

“Time Present” is part of the contemporary stage performance event series “Pārmija”, organised in partnership with “Hanzas Perons” culture venue. The two exclusive shows are taking place for two days only - on August 14 and 15, at 19:00.